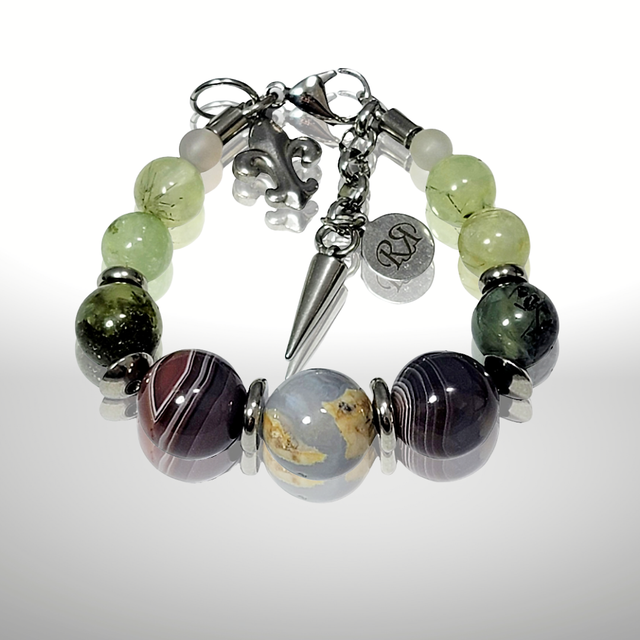 1 available
Add to Cart
Botswana Agate: Used to bring strength and stability in the face of adversity, balance of the physical, emotional, and intellectual energies, harmonization of yin and yang, increased self-confidence, artistic expression, and lust for life.  Origin: Botswana

Prehnite: This stone of unconditional love and inner knowing enhances precognition, alleviates nightmares, phobias, and fears. Also known as the healer’s stone, it links to divine energies to enhance vision to show you the way forth in spiritual growth. It can bring harmony between the wearer, nature, and the elemental forces.
It was discovered 1788 in South Africa and named for its discoverer Colonel Hendrick Von Prehn a Dutch, commander of military forces in South Africa and Governor of the Cape of Good Hope Colony. Origin: Australia, China, France, South Africa, US.

***Prehnite is a soft stone, so store with care to avoid scratching.

Montana Agate: This is a chalcedony containing moss inclusions found in the alluvium of Yellowstone River that was created by volcanic conditions. Uses include emotional mending, attraction of friendship and love, mental concentration and stimulation of intellect, physical strength and stamina, leadership and independence, and to draw positivity from the universe. It’s a blend of yin and yang creating a positive effect on overall life of its wearer. Some believe it can be used to put past life karma to rest. It’s said to be a great gift for nuptial anniversaries. Origin: Yellowstone River, Montana, USA