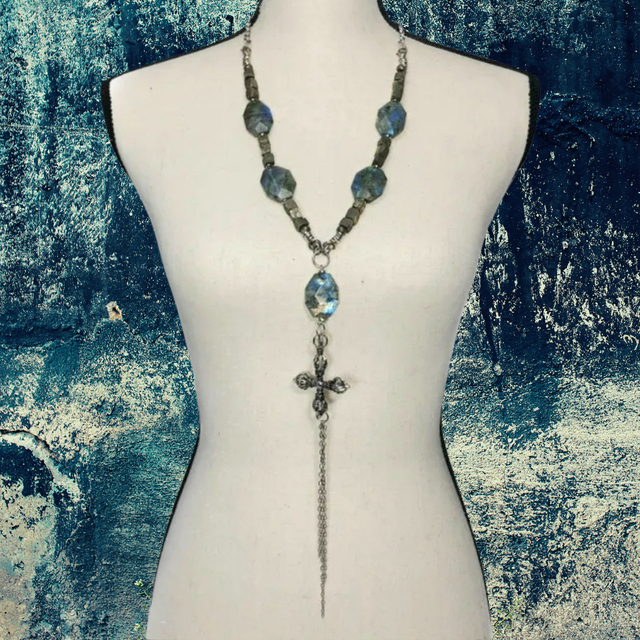 Add to Cart
Labradorite: Born from the storms of the Northern Lights and found in Canada’s Labrador region, the healing properties of this healing crystal are a key to tapping into your creativity and connecting with the higher consciousness.

Labradorite has a long history and rich shamanic vibes. Legend says that once upon a time, an Inuit warrior saw that the Aurora Borealis had become trapped in a piece of stone. He took his spear and struck the rock to help set the light free. Other stories say that Moravian missionaries traveled to this remote Canadian wilderness back in the 18th century and became so enchanted with the mystical stones that they carried them back to Europe.

​Labradorite calms your mind helping you to focus, while stimulating your imagination. As a healing crystal, it’s said to be a powerful aide for the respiratory system, from blood circulation, to breathing, to lung strength. It’s also known to help with easing digestion and maintaining a healthy metabolism.

Pyrite: Also known as Fool’s Gold, is a powerful stone for protection, luck, money and prosperity. Use to manifest abundance by drawing high-frequency energy into the physical body. Pyrite in each hand during meditation can help to re-balance your aura and bring renewed energy for attraction and creation. In ancient Mesoamerican cultures it was used to make mirrors. Native Indian tribes of the Americas considered it a magical healing stone. Before the 1800’s, it was favored as a decorative stone and in the Victorian age it was extremely popular in jewelry. Origin: worldwide

The important message of holiness and purity, indicated by Dorje, doubles its power when it is represented double. The double Dorje, known as Visvavajra, also used as a seal for important documents, is often placed at the base of statues representing the main Tibetan and Indian deities, when worn is a reminder of the absolute indestructibility of Knowledge.
​
http://www.huakadugu.com/blog/index.php/the-dorje-vajra/